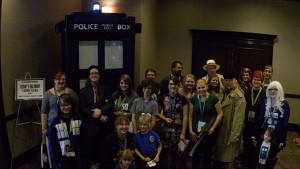 The Game is called Don’t Blink. The Doctor has been tapped by a Weeping angel back to 1970. Because of his experiences with the Angles in the past he built a  recall circuit into the TARDIS, however the Weeping Angels are jamming the signal. So the Doctor has built an transmitter to overpower the jammer. He disassembled it into 15 parts and gave them to kids that he knew were going to attend this convention.  5 teams of 5 are formed, each team must go around looking for our NPCs who have a special sticker on them. These NPCs have parts of the transmitter. (Update 20DEC14 – Each NPCs now require the players to solve a puzzle in 4 minutes OR ELSE) [powerpress url=”https://mccartneytaylor.com/wp-content/uploads/2014/06/132_0417-shouting-dont-blink.mov”](Footage from WhoFest 2013)

The transmitter has been assembled but we don’t know the frequency. The TARDIS core has run an analysis and knows the frequency and badly wants to tell you what it is. However, the core has been slightly corrupted.  Five holograms from the TARDIS core will give you the frequency if you can solve a logic puzzle, but one of them will lie. Cosplayer volunteers are pulled to be the holograms. Each team is allowed to ask a hologram one question at a time, then move on to the next hologram.[powerpress url=”https://mccartneytaylor.com/wp-content/uploads/2014/06/132_0428-bowing-before-time-lord.mov”] (Footage from WhoFest 2013)