Put on a pure coat of just portland cement, as I’ve seen it made to a paint consistancy of 1:1 portland to water. It is then painted over cement walls of cisterns to make them waterproof.
In this mix, I put in iron oxide to give it color.

Finally, 2 years 2 months later from pouring the foundation, I have finished the door and hung said door on the Shed of Requirement.  This glorious shed I’ve built from foundation up, assembled without power tools, carried stone by stone,  pound for pound 220 feet from the driveway to the site.  The door was supposed to open outwards, but due to geometry restrictions on Gothic doors, it couldn’t open. Not a design consideration I had on my list.  Nonetheless, the door now is hung and opens inwards. If it hits anything, it is a sign I have too much shit in the shed.  With the lifespan of the shed targeted at 200 years, the door is expected to be the first to require replacement in 20-40 years.  Now the shed isn’t done yet, there are many hours left to do. 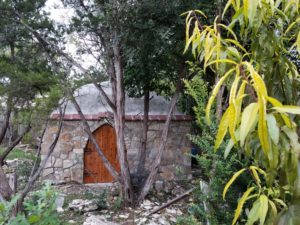 Oh my, this Catalan vault is quite the project.  I knew it would be labor intensive, but I had no idea the issues I’d have on the corners. Should have stuck with a barrel vault.  Guastavino, I am not.  Overall, there is about a 40-45% rise, so close to a perfect hemisphere of 50%.  Spanning 11 feet with a 4.5 foot rise.

The scaffolding is up and usable, but needs some plywood decks on it.

The corners are so labor intensive, 3-4 tiles must be modified for each corner per row.

I figure 40 more manhours then I have to put on the coping stones around the shed, and then design a glorious Gothic door.

Found a very detailed plan of how catalan vaults were built in Great Britain, including tips and tricks that I really wish I knew before I started. If anyone out there wants to try their hand, follow this advice:

So this weekend, the mason and I finished the outside walls. 3 of them, actually, as the back wall won’t be clad.

So the roof is up to 6 courses, with 5 having a second ply mortared on.

The corners continued to be a bitch until I realized I need to slope them in faster than the roof walls, because they need to get to the center faster as they have farther to travel.  Hence the nearby tiles are sloped in as I approach each corner. Now that that’s understood, I think I can make faster headway and get a row done and 2plyed in  2.5 hours. So maybe 3 courses a day 2-plyed completed?

I would have preferred to use broad leaf ligustrum as my weavers but I didn’t have the time or money to harvest so frilling many to have a fence made out of them.  Instead I found a guy who had just cleared out a batch of invasive bamboo and had a thousand linear feet or so. I had him trim off the leafy bits and leave me with the straight stalks.  Driving in the posts (juniper that don’t rot in 20 years) took me 6 man hours. Weaving in the wattles took 2 man hours.  Total length that I built is 32 feet.

Another Spring upon us. The winter was inconsistant with periods of cold and warm, thus most of my fruit trees didn’t get enough chill hours to bloom.

In the front yard, I got a Celeste fig planted near Biff Polywog, our sea dragon.

The front yard swale now has 2 Jujube trees (Honey Jar and ?), 2 Pomgranates (a Wonderful and an Eversweet?), some family purple Irises, and soon another Fig from Dad’s place I call a Center White as it is a white fig with closed eye.

Bought a roll of driveway rebar wire to make tomato cages and tree protector cages. It was tough to work with but it does the job.

The LX 100 camera is great compact 4/3 sensor camera. But it is prone to dust on the sensor which is likely pulled in by suction as it telescopes out.

Taking the camera apart is a chore, but I’ve read someone using a vacuum to apply suction to the lens assembly to pull out dust. Didn’t think much about it, but when I got dust on my sensor after 6 months, well. Had to try.

I turned it on and off twice to get the dust semi-airborne I hoped. Then turned on my vacuum cleaner and using the extension hose, i held it on the front side of the lens assembly then turned the camera off, which collapses the assemble and hopefully exerts positive air pressure. I repeated this 5 times. Then checked the camera using a white background. Poof, dust on sensor gone! Boy, was I surprised. I wanted to make an adaptor out of cardboard between the camera lens and the vacuum, but it wasn’t needed.

My little orange tree at Schick that I bought at the nursery with unripe oranges this spring, finally ripened up and I harvested 8 oranges off of it.  Possibly ripened by thanksgiving. Definitely ripe on Dec 8.  Plan on making some cuttings to ensure the plant lives in case it dies this winter. The other tree, at my house didn’t have oranges this year. Dunno if that is a function of 3″ of soil on a rocky slope, or the youth of the plant. The Schick property has far better soil.