Well, first 18650 laptop batteries are Lithium Cobolt Ion. Other 18650s, especially high current (10+amps) and Tesla 18650s are other chemistries. But I never seem to get my hands on those, only spare laptop batteries.

Anyway, I test incoming 18650s by charging them up to 4.15 volts (not 4.2 because some 18650s aren’t designed to go that high) and then wait 2 weeks and measure the batteries. I then rank them by how much voltage they’ve self-discharged

<4.05 throw out, these obviously have internal damage and can be dangerous

These Poor quality is still good enough for non-critical projects like building packs for inverters or retooling NiCad tools to 18650s.

And I posted a thread about a dangerous voltage inversion on one of the 18650s that I pushed too hard, at which point it devolved into a tool conversion thread. Thus, here is a thread for DIY tool conversions.

For my 18v cheap drill, I opened the battery case, ripped out the guts, kept the connector and shoved 4s2p into the case and wired it up. No balance lead, I just want to see how it performs over time.

For the 12v drill, I did the same thing but only put in a 3s2p pack.  You need to understand that typical laptop cells can only push 1C discharge continous and peak 2C .  The average laptop cell these days is 2.4ah therefore 1C is 2.4 amps. However, they have degraded usually to 2ah so therefore 1C is 2amps and 2C is 4amps. If I have a 3s2p, that means I have 2 parallel for 4ah and capable of 4amps continuous and 8 peak. That is good enough for a cheap drill, but not a high quality drill.  If you want to convert a high amp draw drill you may need to go to hobby king and buy a 10C 3-4ah pack. They will fit in the old drill battery pack (you must check reference sheet for dimensions!).  In my case I had an idea for an external pack.

My 18v XRP Dewalt drill I’m more protective of. I have 3 batteries, 1 good, 1 bad, 1 dying at 15v. The bad one I ran with an idea someone mentioned of an external pack.

I opened the bad pack, ripped out all the cells but the one in the stem. The stem has a cell that fits perfect. It holds the connector fine, so I fixed it in place and soldered a bypass around it to the connector. Then ran these 18ga wire to an external pack and put them in a leather hip pouch that is thick enough to protect it in the field. I found the 18ga wire gets hot while using a sawsall. I’ll fix that with 14 or 10ga wire from my stocks.

The pack itself was 5s6p at about 12ah, with a balancing lead coming off it.  I just used packing tape to tape that out of the way while in the pack.

It should be able to supply 24amps at peak pull.  For charging, I’m just using the alligator clips on my icharger to clip to + and – and charge off of it. In the future as I convert the rest, I’ll convert the stock Dewalt charger with a modded meanwell or other powersupply.

So here it is. 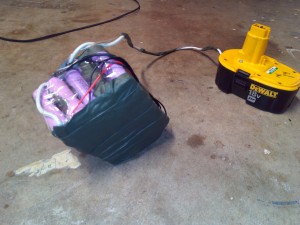 If you need the schematics there are here.

Using the parts of a cassette player, a 9v battery and some scrap metal pieces I think I can build a working cable dolly for a lightweight vid camera.

Here Lewis is with me demoing this thing.

The motor is listed as 9V, awfully convenient to invite a 9V battery to drive it. 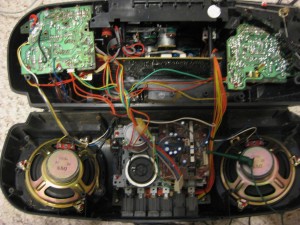 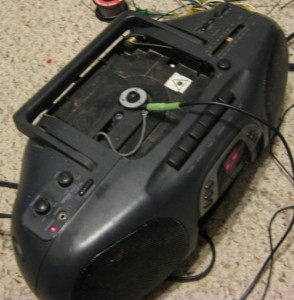